I remember while watching the quite good 2006 documentary This Film Is Not Yet Rated, about the hypocrisies of the thinly veiled censorship committee known as the MPAA, I was completely fascinated by a story that John Waters shared (granted, I’m fascinated by most things he says). After he submitted his 2004 film A Dirty Shame — sadly, still the most recent movie he’s directed at the time of this writing — to the MPAA, he was disappointed but not altogether surprised that it was given an NC-17 rating (a death sentence for the financial potential of a movie, especially at the time, given how many theaters and retailers in America refuse to distribute films with that rating). Being the helpful, understanding bunch that they are, the MPAA was more than willing to discuss their decision with Mr. Waters when asked what he’d have to remove or edit from the film to get it down to an R rating.

Their response? “We stopped taking notes.”

According to John Waters, his film was given an NC-17 for the general tone of the whole movie, which is something you don’t hear every day. This wasn’t simply a case of a few scenes that crossed the lines of what the MPAA considers suitable viewing; they objected to the tone of the movie.

I’m not writing this to argue against the MPAA’s decision in that matter (even though it was a boneheaded one for sure, particularly given that A Dirty Shame is actually fairly tame compared to some of Waters’s early films), but rather to emphasize my fascination with the assertion that the mere tone of a movie could be enough to separate it from other films that on the surface contain similar content. A Dirty Shame isn’t much raunchier or more explicit than most of those frat-boy sex comedies that were popular at the time in the wake of American Pie and the ilk, but the difference is that those other movies were seen as palatable to mainstream audiences despite their vulgarity, while A Dirty Shame was anarchic and irreverent. The message we can take from this is that the social conventions ostensibly upheld by the MPAA can deem nearly limitless crudeness acceptable so long as there’s at least some element of wholesomeness to sprinkle on top so it goes down easier. As long as the guy who fucked the apple pie is actually in love with the girl who stuck a flute up her vagina, it’s all in good fun, kids will be kids, etc. But if the vulgarity is simply there in celebration of itself — even if it’s no more explicit in terms of what’s shown than the sweeter, more teen-oriented stuff — then apparently you’ve gone too far in the eyes of the moral watchdogs.

Tone can make all the difference, and while this may seem like a sharp pivot in this discussion, it’s not just in matters of censorship that this is the case. For connoisseurs of trash cinema, it may seem like we’re always looking for the most extreme scenes in movies, whether that may be the most disgusting gore scenes or the most unbelievable scenes of explicit but completely impractical sex (sometimes I wonder if the people staging certain sex scenes in B-movies have ever actually…you know…had sex). And while that may certainly be true, there’s another category of paracinema that I think too often gets undervalued, and that’s the movies that are just simply so offbeat in their sheer presentation and tone that it’s like they’ve inadvertently invented their own form of cinematic language, like some kind of broken grammar that you can almost grasp, but it’s just off enough that it feels totally alien.

Sure, there are movies that are just simply way-out-there, surrealistic head trips, but that’s not what I’m talking about. I’m talking about a movie like the 1995 direct-to-video oddity Ice Cream Man.

Have you ever watched the children’s show Are You Afraid of the Dark? Or perhaps Goosebumps? Or have you ever watched a cheaply produced after-school special? Okay, get the general tone of that in your head. The awkward editing, the stilted dialogue, the mostly amateurish acting, the unusual framing, the plot threads that come and go and in the end don’t all add up…got it? Hold onto that for a minute. Now add some schlocky slasher movie violence. Don’t let go of that initial tone just yet. We still need to throw in some gross-out humor…actually, I’m not sure it’s supposed to be humorous, so let’s just say it’s just ambiguous grossness. Don’t make either the grossness or the violence too explicit, though, because I wouldn’t want you to lose that after-school special feel you’re thinking of. Just make it explicit enough to where it obviously would never be seen in an actual after-school special. Make sense? Not really? Well, I’d say that means you’re off to a good start. Now just add Freudian psychodrama and surreal shock horror-comedy that kind of comes out of nowhere, and…

I don’t want to overstate its weirdness, because I know there are people who are going to be all like, “This movie isn’t that weird, you uneducated cretin!” (As far as I know, “cretin” is the worst word that people use when they’re insulting strangers online…surely they don’t call each other worse things?) And I’d agree. The movie isn’t that weird. At least not on the surface. It’s not a series of one mind-boggling “what the fuck?” moment after another like, say, Blood Diner (which, it should be noted, is another movie I’d like to write about at length soon). It’s really just that its tone is so offbeat that even the things in the movie that seem like standard, mundane things to happen in a movie all come across as bizarre. It’s a tonal “what the fuck?” movie.

There’s a strange simultaneous artistry and ineptness that this movie achieves. Like I said, I don’t think this is as simple as just being a so-bad-it’s-good laugh fest. For the most part — and I know I might lose a lot of people here — I actually think it’s a genuinely good movie. It doesn’t strike me as glib or self-condescending like way too many low-budget horror movies were during that era (and still are to this day), where it’s like they have to go out of their way to let you know they’re in on the joke. There’s a weird sincerity to Ice Cream Man that sets it apart from that type of movie, and yet I don’t think it’s at all oblivious to the limits of its low-budget, schlocky nature. It kind of embraces it, and yet it also vaguely tries to transcend it, and yet it doesn’t take itself seriously, and yet it doesn’t make fun of itself, and yet, and yet, and yet…

Whatever Norman Apstein’s intentions and ambitions with this film were, I strongly suspect there were several contradictions involved, and those divergent elements are what contribute to the truly singular tone of this movie. I do want to fully admit right now that I was not in a fully sober state of mind when I saw this for the first time, so there’s at least a chance my perception of it was influenced by a slightly altered state of consciousness. But even when I went back to make sure that it really was as offbeat as it seemed to me when I was initially viewing it with a prolonged look of total bewilderment on my face, it struck me much the same way. The movie didn’t necessarily show me anything I hadn’t seen before in my many years of dumpster-diving through all kinds of cinematic junk food oddities, but like the MPAA deciding that the mere tone of A Dirty Shame was enough to put it in a different category than other raunchy films with similar content, the absolutely undefinable tone of Ice Cream Man puts it in what I think is an extremely rare category of “what the fuck?” movies.

My overall point has already been made about this movie, I think, but I do want to just take a moment to backtrack and say something else about it. Clint Howard is just absolutely amazing in this film. It’s possible that the tone would only have gotten it so far without him, and he’s what elevates the whole thing from an offbeat oddity to a truly transfixing paracinematic must-see. He gives way more than probably any other actor would have given in this role, particularly given that his relative fame might have caused him to view this material as being beneath him if he were a more conventional star (not that he’s an A-list celebrity or anything, but he’s fairly well known and is practically Hollywood royalty because of his family). He injects a shocking amount of pathos into his performance and is at once truly creepy and perplexingly endearing. Plus he has spoken nothing but kind words about this movie, and he even spearheaded a crowdfunding campaign to get a sequel made a few years ago. Somehow, the campaign did not reach its goal, so no sequel was ever made. And to me, that may actually be the most baffling thing about this movie. How could such a unique, wonderful gem of a B-movie not have enough of a cult following by this point to even get a meager budget for a sequel obtained via crowdfunding?

That’s partly why I decided to write this. This is a movie that deserves much more lionization that it’s received thus far among cult movie aficionados. It may not be the batshit-crazy feast of extreme sex and gore that most of us seek out, but it’s still batshit-crazy…in a general kind of way. 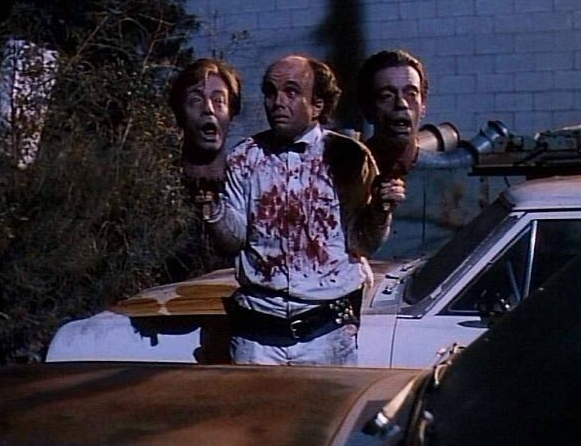 One thought on “Cinematic Brain Freeze: ‘Ice Cream Man’ and the Phenomenon of Offbeat Tone” Leave a comment ›